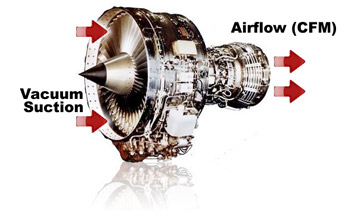 Ok, so we’ve discussed and demonstrated that the Airwatts published in a product brochure are not a good measurement of performance. Instead, the quality and longevity of a motor should be weighed in your cost evaluation along with any performance claims.

There are the two critical performance elements we have yet to discuss that make up the actual performance of a central vacuum system:

(1) Airflow, as expressed in CFM (Cubic Feet per Minute)
(2) Suction also referred to as Vacuum, expressed in Inches of Waterlift. 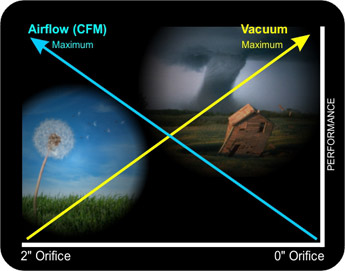 While the Airflow measurement indicates how much air the central vacuum motor can move, the Suction measurement tells us the maximum pull the motor is capable of. This is determined by sucking a 2 inch column of water vertically to its maximum height in inches. Hence, the term “Waterlift”.

The performance curve of a central vacuum motor has an “inverse relationship” meaning that when Airflow is at its maximum, Suction is at its weakest - and vice versa.
The term Airwatts was created to determine the ‘sweet spot’ at which Suction and Airflow co-exist at their most efficient orifice along the performance curve. However, like any brochure performance claim, the maximum value falls outside the typical operating orifice of a working central vacuum system.

The same is true for both Suction and Airflow. A central vacuum does not operate at a 2 inch orifice where Airflow is at its greatest. Nor would you be able to vacuum anything at a 0 inch sealed vacuum orifice when suction is greatest.

Like autumn leaves blowing across an empty parking lot, it’s the movement of air (Airflow) which carries dirt away in your central vacuum system. Just like in nature, it’s the difference in atmospheric pressure (Vacuum) that creates both the movement and velocity of air. 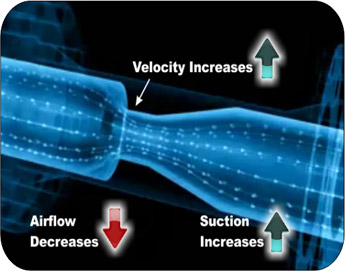 The amount and speed at which air travels (velocity) has a direct impact on your central vacuum’s ability to move debris. In the case of a gentle ocean breeze versus a tornado or a hurricane, this is the difference between drying your laundry and ripping your house off its foundation.

When you reduce the orifice size of your central vacuum hose by using something like a crevice tool attachment, the result is an increase in airflow velocity as Suction increases. You might compare this to walking between two city skyscrapers on an otherwise calm day. Between the buildings, you will experience a big increase in wind speed. This is also known as the Venturi effect.

Earlier, we introduced the term “Effective Orifice or Working Vacuum” which is the orifice Ametek/Lamb engineers determined a central vacuum motor typically operates under load.

To demonstrate why Suction plays the greater role in end of hose performance, an experiment was conducted by Ametek/Lamb engineers using three systems: 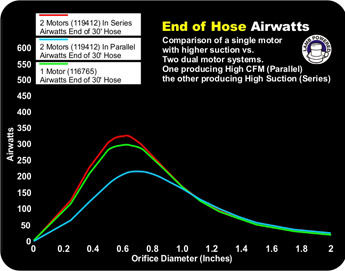 The results were clear.

Let’s consider the above experiment a different way. Imagine your everyday garden hose. The more pressure - the stronger the flow and velocity of water at the end of the hose. Like a central vacuum, the longer the distance from the source and hose nozzle - the less the pressure and flow. 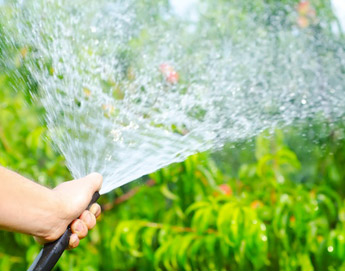 Conclusion: While both Suction and Airflow are required in a vacuum system to move debris, systems with higher Vacuum potential (Sealed vacuum) have the greater end of hose performance in a household installation.

This is because motor Airflow performance is largely negated by restrictions found in a typical central vacuum system.

This can be seen in the Ametek/Lamb experiment. At Cana-Vac. We recommend that when you’re looking at performance numbers, also consider the Sealed Vacuum potential. The closer you get to sealed vacuum by using restrictive tools - the greater velocity potential of that system.